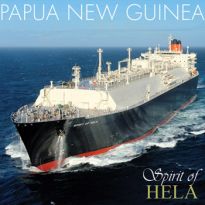 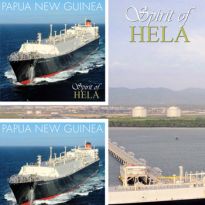 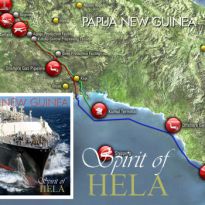 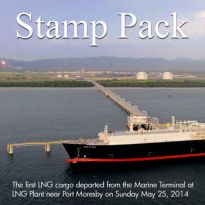 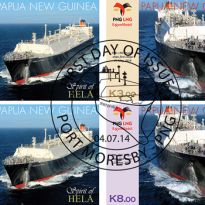 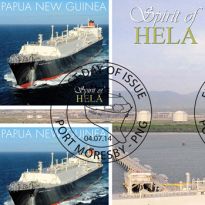 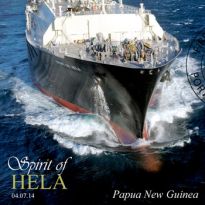 This LNG carrier is almost 300 meters long, or the equivalent of three rugby league fields. It stands at 12 stories high and has the capacity to carry approximately 80,000 tonnes of Liquefied Natural Gas (LNG).

The vessel is jointly owned and operated by Mitsui O.S.K. Lines, Ltd, and Itochu Corporation.

The first LNG cargo departed from the Marine Terminal at LNG Plant near Port Moresby on Sunday May 25, 2014 and discharge was completed on Wednesday 4 June, 2014 in Japan.

Spirit of Hela is named after Hela, a new province established in 2012. Hela is situated in the highlands of PNG, and is where the gas originates from. The gas is being piped down a 700-kilometre long pipeline, through Southern Highlands and Gulf Provinces, to an LNG plant near Port Moresby. During the production phase, there will be six LNG carriers involved (roughly the same size as Spirit of Hela), including Spirit of Hela. These vessels will respectively be arriving and departing from the Marine Terminal every 6 days.

Considering the significance of the project to Papua New Guinea, upon a request from the Honorable Prime Minister, Peter O'Neil, Post PNG released this stamp issue to commemorate the memorable occasion.

Acknowledgement:
Post PNG expresses gratitude to the following officers of ExxonMobil PNG Limited, who have generously supplied images that we featured on both the postage stamps and stationeries: