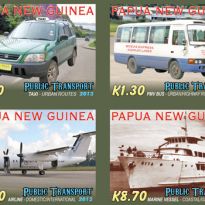 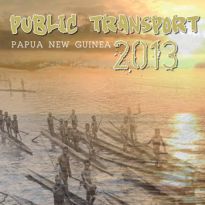 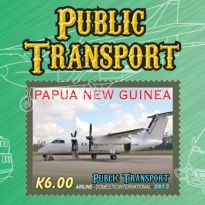 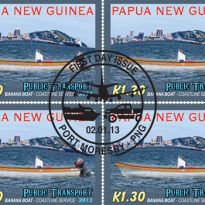 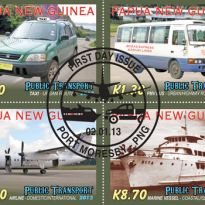 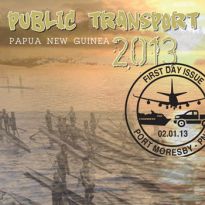 Post PNG, in its continued effort to promote Papua New Guinea, has again released another set of stamps as it’s first issue for 2013, featuring Public Transport in Papua New Guinea, a philatelic thematic and an integral part in the development of the country, through different modes of transport evolved right across the country.

The public transport system in Papua New Guinea covers air, land, water and sea; even then, it is still very difficult getting to some of the remote villages in the country using either of these modes of transport.

The National Capital of Port Moresby is yet to be linked to the Highlands or the Northern Momase regions, even though there are coastal roads running east and west of the capital. From the city of Lae to the highlands, the provinces of Eastern, Western and Southern in the highlands region, are connected by the Okuk, or Highlands highway as it is known today, which also connects across to Madang province via the Ramu highway at Watarais. In the islands region, East New Britain and New Ireland provinces have ring roads.

Passenger motor vehicles (PMVs) service both the urban centres and rural areas charging fares. PMV buses also provide services along the Okuk Highway that runs into the heart of the Highlands provinces from both Lae, Madang and other urban centres around the country.

Taxi and rental car services are available for private hire. Air Niugini, the national flag carrier leads the public air transport by servicing most of the provincial centres with their fleets of Fokker 100s and Dash 8 aircrafts, together with other third-level airline operators, while the smaller airlines service the very remote parts of the country. Flights to some of the very remote areas are only available once or twice a week.

Souvenir Sheet
K10.00 - Dugout Canoe - River and Lakes.
Dugout canoes (logs) are commonly used by river/ lake people as a means of transport. Nowadays, most are powered by outboard motors instead of paddling as traditionally practiced. The Praws and the overall design of the canoes vary from tribe to tribe.