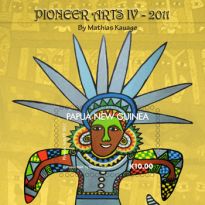 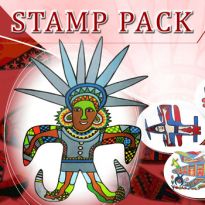 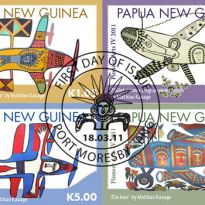 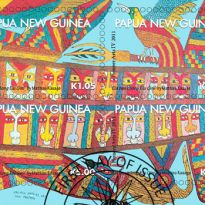 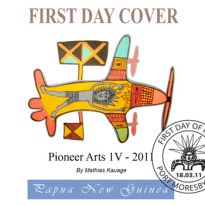 Artist Statement
Kauage was born in Chimbu Province in the Papua New Guinea highlands. During his childhood the Chimbu were still subsistence farmers and then still celebrated their big pig-exchange feasts. They were already governed by the Australian administration, and the Catholic church was firmly established.

As a small child Kauage witnessed the penetration of his homeland by foreign invaders who weresomething unimaginable. They came in bizarre machines:

“A helicopter passed over me first. I went to get a bow and arrow. I sat down on top of the mountain and I wanted to shoot the bird...”Mathias Kauage was an exuberant painter and a founding figure of modern art in the Pacific.

Brief History
In the late 1960s he was employed as a laborer in Port Moresby and was inspired by an exhibition of drawings by a fellow-Highlander, Timothy Akis. Like Akis, he was encouraged by Georgina Beier.

Together with her husband Ulli, Georgina influentially supported contemporary art, theatre, and literature in Nigeria, Papua New Guinea, and elsewhere. Kauage’s work evolved rapidly. Early on he drew fantastic creatures inspired by Chimbu myth, but soon progressed to scenes of Moresby town life and political events. Embracing colour, he went on to produce major paintings around Papua New Guinea’s Independence in 1975, spects of colonial history, and his own experience - not least his meeting with the Queen, who awarded him an OBE in 1998.

His later works were often signed ‘Kauage - Artist of PNG’. Among other works from Kauage, there are number of unexhibited group of early Kauage drawings and beaten copper panels, which form part of a generous donation to the Museum of Archaeology and Anthropology by Dame Marilyn Strathern (William Wyse Professor of Social Anthropology, 1993-2008), who conducted fieldwork in the PNG Highlands and in Port Moresby from the 1960s onward.

Visitors to the exhibition also get the chance to listen to a rare early recording of Kauage singing and playing Chimbu instruments such as a bamboo flute. ‘Kauage: Artist of Papua New Guinea’ is a revelation of Kauage’s creativity. His unique intelligence and visual inventiveness suggest new ways of thinking about the emergence of ‘modern art’ beyond the West.