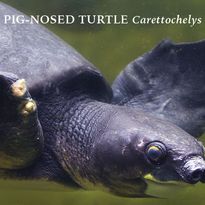 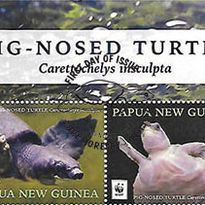 General: Fly River Turtles are large nearly exclusively aquatic freshwater exotics vaguely similar to a North American softshell but thicker & bulkier with a shorter, broader snout & more 'flipper-like' limbs. They are also known as 'pig-nosed turtles,' in light of their bulbous fleshy shout with prominently divided nostrils some consider pig-like. Overall, the animal is grey to brown on top, & white underneath. The Fly River Turtle is the sole surviving member of Order Cryptodira; despite superficial similarities it is not closely related to the softshell turtles.

Carapace: The carapace tends to be grey to live to brown with some subdued lateral white spots/patches. Like in softshells the shell is covered with leathery skin & lacks the keratin scutes of 'hard-shelled' turtles, but unlike softshells the carapace margin is inflexible.

Plastron: The plastron is largely white but pinkish in juveniles. A switch from light color to reddish in an adult may indicate irritation from poor water quality; if not corrected this can kill.