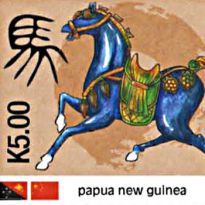 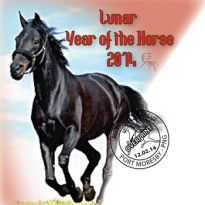 The overprinting of the ‘Year of the Horse stamps’ was a direct result of a late change of postal rates by the Independent Consumer and Competition Commission (ICCC).

After the release of 2014 rates, the K1.70 ‘Year of the horse’ stamps became invalid, thus, prompting the Bureau to overprint them with K5.00, a denomination commonly used for international destinations. There were two different types of K1.70 printed (one with a brown back-ground and a blue horse, while the other had a purple back-ground with a green horse). Each of them was overprinted with 825 sheets of 20 x K5.00 stamps. These stamps saw the post offices going until the release of the Nelson Mandela Stamps issue on 31/03/14.