Lunar Year of the Pig 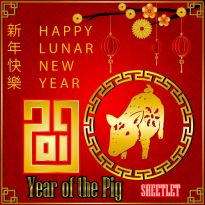 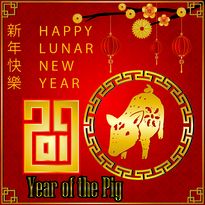 The Pig is the twelfth of the 12-year cycle of animals which appear in the Chinese zodiac related to the Chinese calendar. In the continuous sexegenary cycle of sixty years, every twelfth year corresponds to hai, (the twelfth of the twelve Earthly Branches); this re-recurring twelfth year is commonly called the Year of the Pig. There are five types of Pigs, named after the Chinese elements. In order, they are: Metal, Water, Wood, Fire, and Earth. These correspond to the Heavenly Stems. Thus, there are five pig years in every sexagenarian cycle. For example, in the year 2019, the Earthly Branch is the twelfth, hài, and the Heavenly Stem is the sixth. The Chinese New Year in 2019 is February fifth: this corresponds with the beginning of both the sexegenary year of jǐ hài and also the zodiac year of the Earth Pig.

Pig is not thought to be a smart animal in China. It likes sleeping and eating and becomes fat. Thus it usually features laziness and clumsiness. On the positive side, it behaves itself, has no plan to harm others, and can bring affluence to people. Consequently, it has been regarded as wealth.

Some Chinese Muslims will say that they were born in the year of the hai (twelfth and final year of the zodiac) to avoid saying the "Pig". This is because pigs are haram (forbidden to eat) in Islam and therefore Muslims consider pigs unclean.