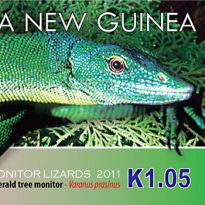 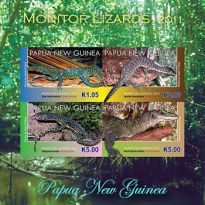 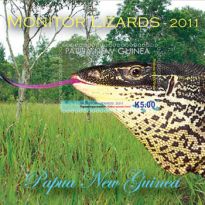 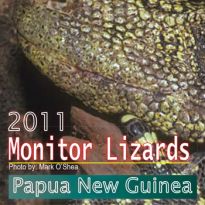 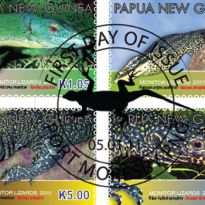 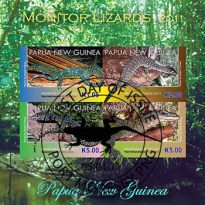 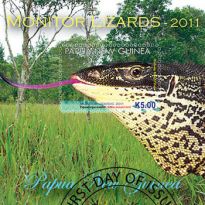 The largest species is the Komodo dragon (V.komodoensis) of Indonesia, but the longest species lives in PNG, the Papuan monitor (V.salvadori).

However, both are small compared to their ancestor Megalania prisca, which grew to 4-5m and lived in eastern Australia (and possibly New Guinea) up to 19,000 years ago, alongside early human inhabitants. Monitors are also accomplished egg-thieves, gorging on the eggs of birds and reptiles, in fact the name ‘monitor lizard’ is believed to have originated because in Africa these lizards were good monitors of where there were dangerous crocodiles, since they would linger nearby, waiting their chance to raid crocodile nests. The generic name Varanus comes from the Egyptian word ‘waran’, which also means ‘monitor’, and originally referred to the Nile monitor, (V.niloticus), the most widespread African species.

Monitors are found through Africa, Asia and Australasia, but they are replaced in S.America by the unrelated Tegus (Tupinambis). They reach their greatest diversity in Australia (26 species) but mainland Papua New Guinea is home to eight species, and two more occur on the islands of Milne Bay Province.

They occur in virtually all habitats from mangrove swamps to urban areas, and from kunai grasslands to montane rainforest. All monitors are diurnal (day-active). Monitors have acute senses and even possess a forked tongue like a snake that enables them to track down carrion or prey over considerable distances.

The most recent research also suggests that some species, such as the Komodo dragon and the Australian Lace monitor (V.varius), actually possess venom glands in their jaws, so the unpleasant ensects caused by their bites may not just be as a result of the virulent bacteria in their mouths, but also due to venom oozing into the skin of the victim through the teeth lacerations. The skins of some monitor lizards are used on traditional drums in PNG and their meat is also eaten in rural areas.

Black tree monitor (V.bogerti) is closely related to the emerald tree monitor, of which it was once a subspecies. It is endemic to the d’Entrecasteaux Archipelago of Milne Bay Province (Ferguson and the Trobriand Islands). It is generally black without any other patterning, and its behaviour and ecology in the wild is little documented.

Finsch’s monitor (V.finschi) is known from a few scattered locations in New Britain, New Ireland and Madang, in PNG, from Queensland, and the Kai Islands in Indonesia. It is thought closely related to the blue-tailed monitor. It inhabits mangrove swamps and coconut plantations, is patterned black with yellow ocelli markings, feeds on a wide variety of prey and is both arboreal and aquatic.

Rossel Island monitor (V.telenesetes) is endemic to Rossel Island in southeast of Milne Bay Province. A generally drab black species related to the emerald tree monitor, this is probably the least known of all the New Guinea monitors with possibly only a single museum specimen known. There have been no observations of its wild behaviour or ecology.

Acknowledgement
Mark O’Shea has made numerous expeditions to Papua New Guinea since first setting foot there in 1986, and has a particular passion for its herpetofauna. He was awarded an honorary DSc for his fieldwork and publications in 2002 and holds a Fellowship from the Australian Venom Research Unit, University of Melbourne to continue his fieldwork, primarily on medically important venomous snakes. He lives in the United Kingdom. This is the second series of stamps he has prepared for PostPNG, the first being Dangerous Snakes of Papua New Guinea, issued in September 2006.