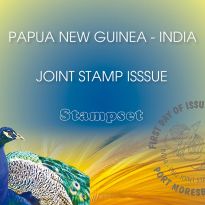 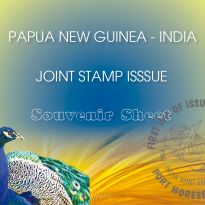 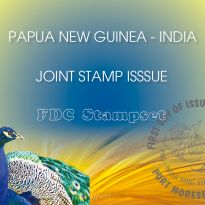 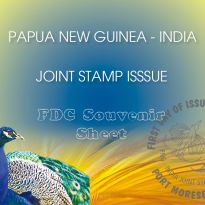 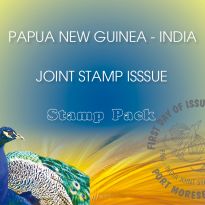 This joint postage stamp issue between Papua New Guinea and India is on ‘National Birds’ as a designated representative for the fauna of both countries. The national birds - Ragianna bird of Paradise for Papua New Guinea and Peacock for India are chosen on the basis of their unique qualities that each bird symbolised. The national birds uphold core qualities and values for the two nations, that prominently feature in each nation’s cultural history, together with the beauty the beauty that it embodies. The indigenous nature of the birds is another strong reason for their recognition the world over as national birds. This also accord the birds special status with increased awareness and dedicated conservation efforts.

RAGIANNA BIRD OF PARADISE - The Bird of Paradise is the National bird of Papua New  Guinea and are considered to be the most beautiful bird in existence. The variety of colors of the bird is extreme, have long thin feathers that look either fragile or rigid. During the heat, males exhibit all their beauty in acrobatic manifestations trying to attract some of the not so colorful females.

The Raggiana bird of paradise is 34 centimeters long. Its overall color is maroon-brown with a grayish-blue bill, yellow iris and greyish-brown feet.Its diet consists mainly of fruits and arthropods. The species is an important seed disperser of some fruiting trees in Papua New Guinea including some species of mahogany and nutmeg.

The birds of paradise including ragianna are members of the family Paradisaeidae of the order Passeriformes. The majority of species are found in eastern Indonesia,  apart from Papua New Guinea and eastern Australia. The family has 42 species in 15 genera. The members of this family are perhaps best known for the plumage of the males of the sexually dimorphic species (the majority), in particular the highly elongated and elaborate feathers extending from the beak, wings, tail or head. For the most part they are confined to dense rainforest habitat. The diet of all species is dominated by fruit and to a lesser extent arthropods. The birds of paradise have a variety of breeding systems, ranging from monogamy to lek-type polygamy.

The breeding system of the Ragianna bird-of-paradise is polygamy. Males congregate in leks [display arenas for visiting females] twenty days in captivity. As in all polygamous bird-of-paradise, the female alone assumes all incubation duties.

Birds-of-paradise are closely related to the corvids and range in size from the king bird-of-paradise at 50g and 15 cm to the curl-crested manucode at 44 cm and 430g (The male black sicklebill, with its long tail, is the longest species at 110 cm. In most species, the tails of the males are larger and longer than the female, the differences ranging from slight to extreme. The wings are rounded and in some species structurally modified on the males in order to make sound.

There is considerable variation in the family with regard to bill shape. Bills may be long and decurved, as in the sicklebills and riflebirds, or small and slim like the Astrapias. As with body size bill size varies between the sexes, although species where the females have larger bills than the male are more common, particularly in the insect eating species.

PEACOCK, Pavo cristatus (Linnaeus), is the national bird of India. Emblematic of qualities such as beauty, grace, pride and mysticism, it is a multihued, swan-sized bird, with a fan-shaped crest of feathers, a white patch under the eye and a long, slender neck. Much in contrast to the natural phenomenon, the male specie of the bird is much more strikingly stunning than its female counterpart. The male bird, peacock, flaunts a gleaming blue breast and neck and a spectacular bronze-green train of around 200 elongated feathers. It is capable of extending its tail erect like fan as ostentatious display.

The elaborate courtship dance of the male, fanning out the tail and preening its feathers is a beautiful sight. On the other hand, the female bird, peahen, slightly smaller than its male counterpart. Brownish in color, the female bird also lacks the train visible in the male specie. Peacock is predominantly found in the Indian sub-continent, ranging from the south to east of the Indus river. Jammu and Kashmir, east Assam, south Mizoram and the whole of the Indian peninsula also is home to this impeccable bird. The bird lives in jungle lands near water and is thus, chiefly found in the wilds in India (sometimes, domesticated in villages as well).

Peacock is illustrated in pictures accompanying Indian Gods and Goddesses. The sacred bird of the India, the bird was once bred for food, but now hunting of peacocks is banned in India. It is protected not only by a religious sentiment, but also by parliamentary statute. Peacocks have been given full protection under the Indian Wildlife (Protection) Act, 1972. Apart from India, it is also involved to the cultures prevalent in Far East, Ancient Persia, Greek and Christian. While the figure of peacock features in various Islamic religious buildings, the bird is symbolic to ‘Resurrection of Christ’ in Christianity.

Coming back to Hinduism, peacock is portrayed as the image of the God of thunder, rains and war, Indra. People believe that, when a peacock extends its tail erect like fan for an enchanting and mesmerizing demonstration, it indicates that rainfall is on the cards. Though this might sound strange, but the fact is somewhat true. On seeing the dark clouds, peacock outspreads its tail and starts dancing in rhythmic fashion. Its dance movement has been incorporated in most of the Indian folklore, including Bharatha Natyam. In southern part of India, peacock is considered as a ‘vahana’ or vehilce of lord Muruga.

The male specie, peacock, is characterized with a 2.12 m (7.3 ft) length, in full breeding plumage, and weighs about 5 kg (11 lbs). The female bird - peahen, on the other hand, is about 86 cm (34 in) long and weighs about 3.4 kg (7.4 lbs). Adoring the glistening blue-green plumage, the Indian peacock has an extension of feathers on its back.

Each feather is exemplified with an eye at its end. The Indian peahen is a mixture of dull green, grey and iridescent blue, with the greenish-grey color outweighing. The bird is mostly found in the dry semi-desert grasslands, scrub and deciduous forests and feeds on mainly seeds, but some also eat insects, fruits and reptiles.