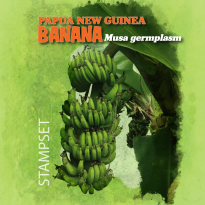 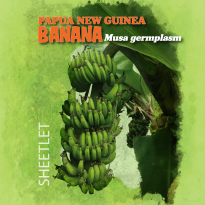 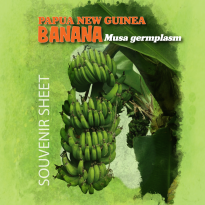 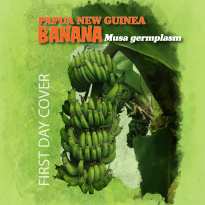 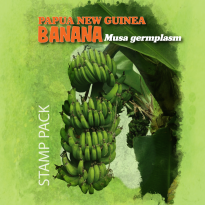 Papua New Guinea lies within the centre of origin of the genus Musa which extends throughout South East Asia and into the Pacific region. Great diversity in both the wild and cultivated members of the genus can be found in this region and recent studies using molecular markers suggest that edibility may have first arisen in Musa in the eastern fringes of South East Asia.

Bananas are a major food crop in many parts of Papua New Guinea, ranking second in importance after sweet potato. Annual production is approximately 940 000 tonnes with a per capita

consumption estimated at 250 kg/year. Papua New Guinea is unique in that it is probably the only country in the world where diploid bananas remain agriculturally significant. This situation is thought to resemble the production systems prevalent in South East Asia many thousands of years ago, when primitive, poor yielding diploid landraces were common.

In recent times however, these ancestral cultivars have generally been replaced by more vigorous and disease tolerant triploid varieties. The collecting of Papua New Guinea’s unique diploid genepool, for preservation as well as for use in breeding programmes, was recommended during an international workshop on banana and plantain breeding strategies organised by ACIAR and INIBAP in 1986.

In this stamp issue feature bananas that were collected in the Autonomous Region of Bougainville.

The Autonomous Region of Bougainville lies approximately 900km to the East of the island of Papua New Guinea in the western Pacific region of Melanesia. Principally comprised by the islands of Buka and Bougainville, the islands are geographically and culturally part of the Solomon Islands archipelago. Studies of the diversity of bananas (Musa sp.) in the region goes back to the work of Dr. Paul Allen in the early 1960's when a small number of specimens were collected on the island of Bougainville. Also in the 1960's, Dr. George Argent conducted a survey of the wild Musa populations of the island and described the endemic species Musa bukensis, as well as a distinct population of M. maclayi. During the 1980's, a series of collecting expeditions were organized by (then) IBPGR across Papua New Guinea.

To compliment these studies, Post PNG Philatelic Bureau is pleased to feature some of these banana species in this issue.