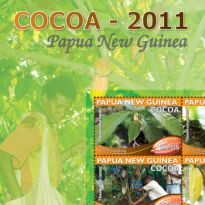 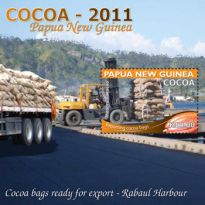 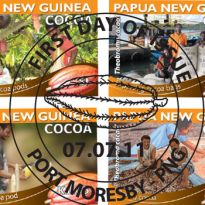 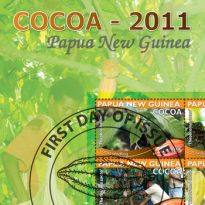 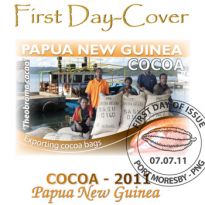 The driving force behind commercial agriculture in Papua New Guinea has always been the export crops. This trend will no doubt continue to dominate the development of the sector in the future.

Cocoa
After coffee, cocoa is Papua New Guinea's second most important agricultural export crop. Existing plantings are highly concentrated geographically in the islands region. But many other areas in the country are highly suitable for cocoa production. Smallholder production has been increasing by about 5 per cent a year over the last 10 years, and the 70,000 producers now account for 70% of total output. Estate production has fallen steadily since 1975, mainly because of disease, but this trend has now been reversed and estates are rapidly replanting with high yielding and more disease resistant hybrids.

The introduction of high-yielding hybrids has greatly improved the projects in Papua New Guinea, and the country remains a competitive producer, even at low prices. Early results from their use are showing yields up to 2 tonnes per hectare while research continues to develop new varieties with even greater yield potential.

Future of Cocoa
The prospects for cocoa look good. In the longer term, the potential for further expansion is excellent, particularly through a further increase in smallholder productivity and a major expansion in upstream processing.

Credentials
Post PNG would like to thank Koko Indastry, Kokopo for the images used in this brochure and NGIP Agmark for supplying us with the photos featured on the stamps. NGIP Agmark is the supplier for agricultural machinery and tools in NGI /PNG and is the main buyer/ exporter for the cocoa industry in Papua New Guinea.More information on Cocoa in Papua New Guinea can be obtained from the Cocoa Industry Office or NGIP Agmark.