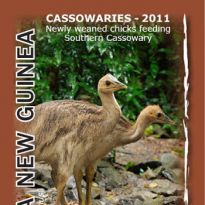 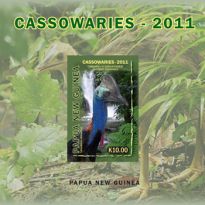 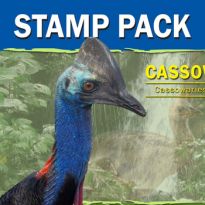 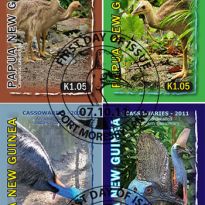 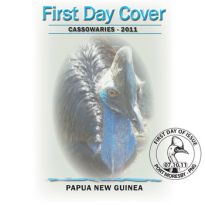 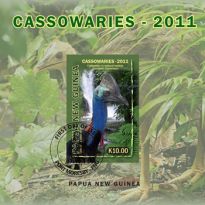 Flightless Feathered Family
The cassowaries are ratites, very large flightless birds in the genus Casuarius native to the tropical forests of Papua New Guinea, nearby islands and northeastern Australia.[2] There are three extant species recognized today.

The most common of these, the Southern Cassowary, is the third tallest and second heaviest living bird, smaller only than the ostrich and emu.

Cassowaries (from the Malay name kesuari)[3] are part of the ratite group, which also includes the Emu, rheas, ostriches, and kiwis, and the extinct moas and elephant birds. The other two species are the Northern Cassowary, Casuarius unappendiculatus and Dwarf Cassowary, Casuarius bennetti. They are also found in Papua New Guinea.

Of the three species of cassowary, the southern, or double-wattled, cassowary Casuarius casuarius is the largest and probably most well known.

It was first brought from New Guinea to Europe in 1597 by Dutch traders and gets one of its names from the bright red, fleshy pouches of skin (wattles) that hang from its throat.

The casque is bladelike and brownish, and the head, neck, and throat are featherless so bright blue skin can be seen. This species lives in the New Guinea lowland rain forests and is slightly less common in northern Queensland, Australia.

Reproduction
Generally solitary birds, cassowaries come together only during the breeding season. Reproduction occurs during the dry season of June to October, when the food supply is greatest and when chicks have the best chance of survival. During this time the female lays three to five light green eggs in a nest that the male has constructed.

Once the female has laid her eggs, she leaves the male in search of another male with whom she may repeat the courtship process. She plays no part in incubating or in rearing of the chicks. Incubation is carried out entirely by the male for about 50 days.

The brown, striped chicks are able to follow the male around in search of food several hours after hatching. The male stays with the chicks for approximately nine months protecting them from predators and teaching them to find food on their own.

Relationship with People
Cassowaries are very important to the native people of New Guinea both economically and ritually. Cassowaries have been traded for pigs and even as brideprice for a wife and compensation payment especially in the highlands provinces .

Some tribes hunt them for their meat which is considered a delicacy. They use the feathers to decorate headdresses, and the feather quills for earrings. The sharp claws are often placed at the tips of arrows, while the strong leg bones are used as daggers.

Conservation
Although none of the three species of cassowary are globally threatened, all are suffering from loss of habitat.

Their strict ecological needs mean that they are especially vulnerable to shrinking habitats. As rainforests are cleared, cassowaries are forced from one forest to another, often crossing roads where they are in danger of being hit by passing cars. Introduced feral pigs and dogs prey often upon chicks. In New Guinea, an increase in the price of cassowary feathers by the native people, has led to an increase in hunting of the cassowary.