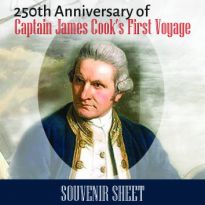 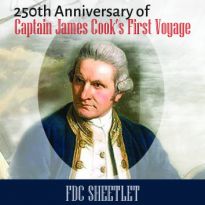 Captain James Cook was an English naval explorer/navigator whose expeditions in the 1770s charted much of the lands of the Pacific, including New Zealand, Australia and Hawaii. The son of an agricultural worker, Cook was apprenticed to shipbuilders and joined the navy in 1755. He became a master seaman in 1759 and spent most of the next decade surveying around Newfoundland and Labrador. He commanded the Endeavor on his first trip to the Pacific, an expedition to observe Venus for the Royal Society (1768-71). On his return trip he circumnavigated New Zealand, charted the eastern coast of Australia and returned by way of Java and the Cape of Good Hope. His second voyage to the Pacific, commanding the Resolution, and the adventure took Cook along the northern edge of Antarctica and helped him outline the southern hemisphere; in three years (1772-75) he lost only one crew member. His third and final voyage (1776-79) was an effort to find a passage across the northern part of America. After he was forced to turn back at the Bering Strait, he reached Hawaii in January of 1779. A dispute at Kealakekua Bay (over a stolen boat) ended with Cook dead, apparently at the hands of the islanders. Considered one of the first navigators of the scientific era, Cook’s expeditions made him the most famous naval explorer since.

Joining hands with the rest of the world, the Post PNG Philatelic Bureau, in commemoration, issued a sheetlet and a miniature sheet featuring some of his (captain James Cook) many iconic images depicting memorable moments of his journey to fame.