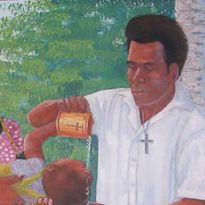 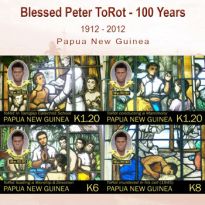 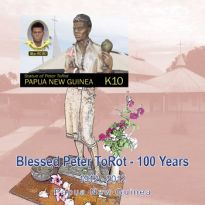 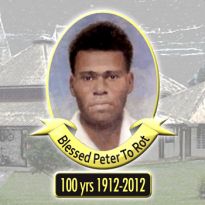 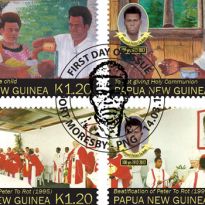 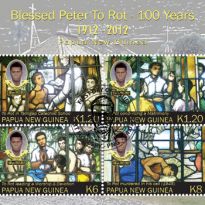 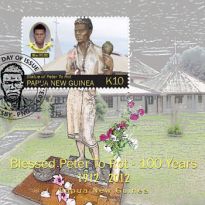 Peter ToRot was born in 1912 in Rakunai, a village on the Melanesian island of New Britain, today an eastern province of the independent nation of Papua New Guinea. Due to the lack of documentation, destroyed by the Japanese during the war, it is impossible to determine his date of birth. This also the case for his martyrdom and for almost all the events in his life. In the culture of Papua New Guinea it was not customary to keep public records.

His parents, Angelo ToPuia and Maria la Tamul, baptised as adults, belong to the region’s first generation of Catholics. On 29th September 1882 the first group of Missionaries of the Sacred Heart arrived in Matupit, New Britain, 10 years after the Methodists had begun preaching and had established the Malaguna Mission. In 1898 Peter ToRot’s father, together with other powerful tribal chieftains, was solemnly baptised, forming the nucleus of the first generation of Catholics in the region. It was Angelo ToPuia himself who opened the village of Rakunai to the faith and to collaboration with the missionaries. He promoted the Christian life in his village, where he was chief for 40 years.

Peter ToRot had a strong inclination to pity and obedience, which convinced his parish priest Fr Emilio Jakobi that the boy was born to be a priest. A capable but modest catechist. In 1930, at the age of 18, the Servant of God was enrolled at St Paul’s Mission School for training catechists who would work closely with the missionaries in evangelisation.

He succeeded brilliantly in his studies and in 1933 obtained the catechist’s diploma. He let the other catechists guide him in his work and accepted their advice, but eventually eclipsed them all and soon became their recognised leader, although he was younger”.

When he had completed his studies, Peter was assigned to the mission in his own village, and so began his work as a catechist in Rakunai On 11th November 1936, Peter ToRot married the young Catholic Paula la Varpit from the neighbouring village.

Their marriage was celebrated in church but many local traditionslike the 50 shell necklaces to buy the bridewere joyously included. Three children were born from his marriage with Paula: Andrea, who died after the war; a little girl, Rufina La Mama, who is still alive; and the third child (name unknown), who was born shortly after the Servant of God’s death in 1945 and died soon thereafter.

The decisive turning point in Peter ToRot’s life and mission occurred in 1942. After the Japanese occupation, all the missionaries and mission staff were imprisoned in a concentration camp. The Servant of God remained alone. During the war he was the only spiritual guide for Catholics in the Rakunai district. At the start of the Japanese occupation, he was on good terms with the military authorities. This friendly relationship with the inhabitants ceased in 1942 after the Japanese suffered some military reverses.

The military police replaced the local authorities, creating an atmosphere of repression. Christain worship and all types of religious gatherings, public and private were forbidden. Subsequently, the repression became more violent. The Japanese, seeking to force the local chieftains into collaborating with them, decided that the Tolais should return to their previous practice of polygamy.

This was a severe blow after almost half a century of missionary work. Peter firmly opposed this and was not afraid to disagree publicly with his brother Joseph. ToRot was arrested in April or May 1945. According to accounts, his questioning by the official Meshida was a farce as well as an expression of the crudest violence.

He was sentenced to two months’ imprisonment. The Servant of God was held in a concentrationncamp which had been set up in a cave. Various accusations were levelled at him, including: religious gatherings, undue interference in the Japanese plan for polygamy and persistence in his catechetical activities.

Efforts by the Methodist chief of Navunaram and the chief of Rakunai, Anton Tata, to have Peter released failed. A prison mate said: “He was often visited in prison by his aged mother and his wife, who brought him food everyday. At one of their last visits.

ToRot told his mother: the police said a Japanese doctor will be coming to give him some medicine. I suspect that this is a trick. I am really not ill at all and I cannot think what all this means”. Despite the precautions of the Japanese, Arap ToBinabak, a prisoner, could see the brightly lit room where Peter had been summoned after the doctor arrived.

The doctor gave Peter an injection, then something to drink and finally stuffed his ears and nose with cotton wool. Then the doctor and two police officers made him lie down. Peter was stricken with convulsions and looked as though he was trying to vomit. The “doctor” covered his mouth and kept it closed. The convulsions continued for a time, while the doctor held him still. Peter fell into unconsciousness and after a long while drew his last breath.

The same eye witness gently spread the terrible news of Peter’s death to his companions. Several prisoners, taking advantage of the night-time absence of the Japanese, wanted to see his body. Thus they verified his horrible death. But in the morning they saw a totally different scene: Peter’s corpse was now arranged on the dormitory floor.

The Japanese, summoned by loud speaker, registered great surprise when they saw Peter’s corpse. Later, to Anton Tata, an old family, the Japanese cynically replied that the prisoner died from a secondary infection. In the meantime, they informed the family and returned his corpse for burial, which took place in silence without a religious rite.

The immense crowd which attended the Servant of God’s burial, not withstanding the presence of the Japanese police, immediately considered Peter ToRot a martyr. This was not a momentary reaction but a growing certitude. In fact, in the Tolai language Peter ToRot is called “A martir ure ra Lotu”: “A martyr for the faith”.