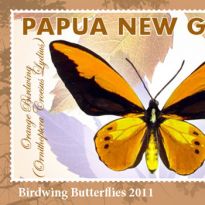 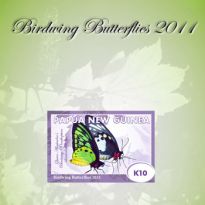 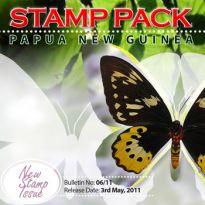 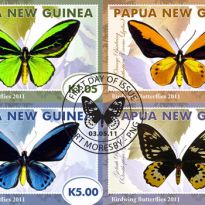 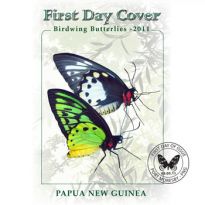 Birdwing butterflies are the largest of all butterflies. Birdwings are typified by large size (up to a maximum body length of 7.6 cm or 3 inches and a wingspan of 28 cm or 11 inches in O. alexandrae), showy coloration (in contrasting shades of green, yellow, black, white, and sometimes blue or orange), and slender, lanceolate forewings.

The male Birdwing is brightly coloured with green, gold and black, and is smaller than the female. The larger female Birdwing is black and white, with yellow markings on the hindwings. She has a wingspan of up to 20 cm.

With few exceptions (i.e., the New Guinean O. meridionalis and O. paradisea), the hindwings lack tails. Sexual dimorphism is strong in Ornithoptera species only, where males are black combined with bright iridescent green, blue, orange or yellow while the larger and less colourful females are overall black or dark brownish with white, pale brown or yellow markings. Throngs of Birdwing butterflies can be seen around Aristolochia acuminata or Pararistolochia deltantha vines in summer in the tropical rainforests. These vines are also called Dutchman’s Pipe because of the shape of the flowers.

The female Birdwing butterfly lays her eggs on the leaves of these two species of Aristolochia vines. First, she locates the correct plants by ‘tasting’ various leaves with chemical receptors in her forelegs. These receptors pick up chemical cues from the leaves of the vine. She also uses sense organs at the end of her abdomen to find tender young leaves which will be suitable for caterpillar food.

Aristolochia vines are poisonous. The Birdwing caterpillars use these plant poison for their own protection by storing the toxins in prominent fleshy orange-red spines on their backs. This colourful protection mechanism prevents birds from eating them.

It is likely that O. priamus miokensis is actually a hybrid between O. priamus urvillenaus and O. priamus bornemanni discovered in the islands of New Britain and Bougainville. Specimens of this subspecies are variable, and can be identical to specimens of either parent, or intermediates.

Immigration may also explain its rarity, as Mioko is a small island and, as of 2001, its host plants had been reduced to a few Aristolochia tagala vines growing in a local village.