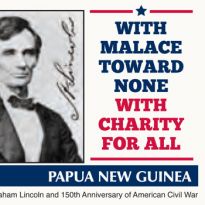 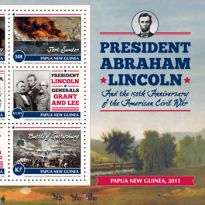 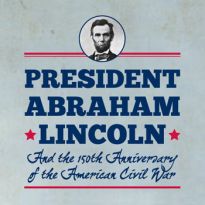 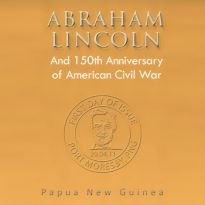 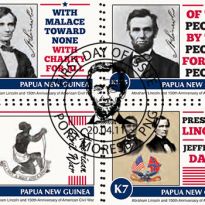 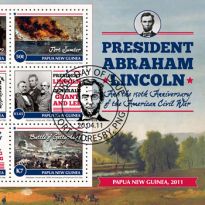 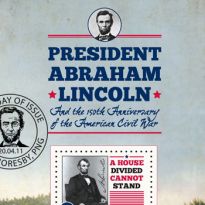 This beautifully designed stamp issue features images of U.S. President Abraham Lincoln as well as battle sites of the American Civil War. As 16th president of the United States, Lincoln spent his presidency attempting to put an end to the Civil War.

Within the first four months of his presidency, seven states seceded from the union.His goal, however, remained to keep the Union together. On January 2, 1863, the Emancipation Proclamation was put into effect, freeing all slaves.

On November 19, 1863, four and a half months after the Union armies defeated the Confederate armies at the decisive Battle of Gettysburg, President Lincoln delivered what is now considered to be one of the best known speeches in United States history, the Gettysburg Address at the dedication of the Soldiers’ National Cemetery in Gettysburg, Pennsylvania. Because Lincoln is thought of as one of the greatest presidents in the history of the United States, these historical postage stamps issued by Papua New Guinea are sure to be highly sought after by collectors and dealers worldwide.

Stamp Set
K1.00 - “With Malace Toward None, With Charity For All” Abraham Lincoln,
K1.05 - “Of the people, By the people, For the people”
K5.00 - A symbol of Freedom -American Civil War
K7.00 - President Lincoln and Jefferson Davis: Jefferson Davis was the only president of the Confederate States of America, the group of southern states that seceded from the United States and prompted the Civil War (1861-65).

Souvenir Sheet
K10.00 - A House Divided Cannot Stand
On June 16, 1858, more than 1,000 Republican delegates met in the Springfield, Illinois, statehouse for the Republican State Convention. At 5 p.m. they chose Abraham Lincoln as their candidate for the U.S. Senate, running against Democrat Stephen A. Douglas. At 8 p.m. Lincoln delivered this address to his Republican colleagues in the Hall of Representatives. The title comes from a sentence in the speech’s introduction, “A house divided against itself cannot stand,” which paraphrases a statement by Jesus in the New Testament.