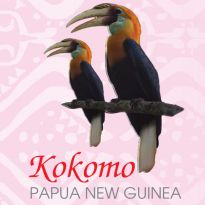 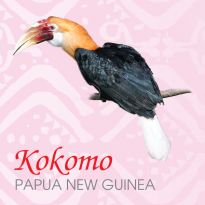 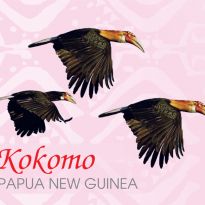 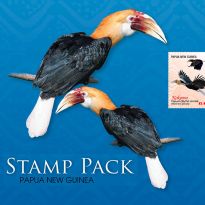 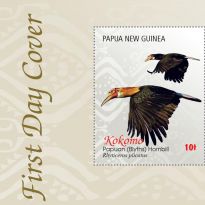 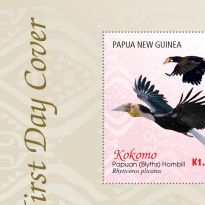 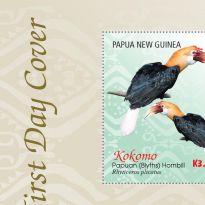 In this issue, Post PNG, as the mandated postal administration in its continued effort to promote Papua New Guinea’s traditional arts, crafts, flora and fauna has released in this stamp issue, the Papuan hornbill.

The Papuan hornbill (Rhyticeros plicatus) or Blyths hornbill as commonly known is found in Papua New Guinea, the Moluccan Islands in Indonesia, and the Bismarck Archipelago, east to Solomon Islands, the Papuan hornbill is the only hornbill that is found within these areas.
The adult male has mainly black plumage with a golden or orange-buff head, white throat and a white tail. Its irises are reddish brown, and the eye is surrounded by naked pale blue skin. The female is a smaller, mainly black bird with a white throat and tail. Both sexes have a very large horn-coloured bill and casque. Young birds of both sexes resemble the male.
When in flight the sound of its wings is loud and with distinctive rushing noise with a range of grunting and laughing calls.
The Papuan hornbill inhabits evergreen primary and secondary forest and may also be found in deciduous woodland alongside rivers and swampforest with suitably large trees that is suitable for resting and occurs throughout lowland forests, and is the only hornbill species native to Papua New Guinea, and the regions largest flying bird.
The female is restricted to the nest cavity throughout the incubation and nestling period, being largely sealed inside by plastering up the entrance with a mixture of fruit pulp and rotten wood, leaving only a narrow aperture through which the male feeds her, with diet consists mainly of fruits, especially figs, occasionally supplemented with insects and other small animals.
The Papuan hornbill nests inside hollows of large trees.